Xenopolitan is also available in print on DriveThruRPG.

Xenopolitan is an RPG about everyday life in an alien metropolis. Live the life of an extraterrestrial person with real world problems. Play as a human or extraterrestrial entrepreneur, student, artist, social worker, politician, reporter, criminal, detective, or anything else, and experience life in this galactic futurescape.

Setting: The year is 2099. Ingress is a city with 90 million people from thousands of different species and planets. It flies in the skies above Earth and is a hub for extraterrestrials conducting business with various Earthling corporations and governments. Players are denizens of this sprawling, cosmopolitan city, and their backgrounds and goals can be as diverse as the city’s population.

System: Xenopolitan is a complete game based on the popular Fudge system. The rules are fast, flexible, and easy to learn. The broad skill system enables game masters and players to tell a wide variety of stories and create characters from all walks of life. Players might be reporters for a media corporation, members of a rock band, or partners in a law firm. The possibilities are as vast as real life.

Xenopolitan is a feature length tabletop rpg about playing as a normal person in a weird future. It's by Willy Elektrix, the designer of Void Pyramid, and like Void Pyramid it is way too good to be this free.

The PDF is 78 pages, with a solid, well-organized layout and a lot of quirky, charming black and white art.

The book is packed with lore, and the lore does a really good job juggling big picture information with specific ground-level details. Fully half of the book is setting-specific information, and by the end of it you'll feel like you're reading about a place you've visited, not a fictional sandbox.

Xenopolitan takes place on Ingress, an economically deregulated city orbiting earth. A lot of money flows through Ingress, but it's mostly concentrated at the top, and everyone else makes due with living in a place where all the infrastructure is sort of designed to wring the income out of you.

This creates a natural story hook for basically every character: "how do you get through the day?" Simultaneously, it leaves open the option to get involved in high politics, crime, or more action-movie-esque stuff that the game doesn't pitch itself as being about.

Mechanics-wise, Xenopolitan uses Fudge dice. If you've played Fate, you're familiar with them. If not, they're d6s that range from -1 to +1. This means that most rolls will average to +0, and thus your skills will tend to control whether or not you succeed at tasks. Bonuses and complications are brought into play by a d10 Luck Die, and aren't tied to your skill roll's results, so a 1 on the Luck Die is always a complication, even if your roll succeeded. Likewise a 10 on the Luck Die is always a bonus, even if your roll failed.

Instead of Fate Points, Xenopolitan uses Focus points, where are scarcer and less effective. Everyone gets three per session, and they can only be used to slightly nudge dice results.

For GMs, a number of resources are provided. There's sample characters, the thorough lore section mentioned above, and a chapter on GMing tips. There's also a super detailed example of play, making the book surprisingly beginner friendly.

Overall, if you want to run a weird sci-fi game with normal-person-scale stakes, I'd definitely recommend Xenopolitan. And by a similar token, if you already have a system picked out but haven't decided on a setting yet for your sci-fi game, I'd strongly recommend giving Xenopolitan's city of Ingress a look.

I meant to say this months ago, but this is a very informative review. Thanks for this!

No worries. Thank you for writing Xenopolitan!

The lore in here is really cool. I think I'll use it the next time I run a sci-fi game. Thanks for making this :) 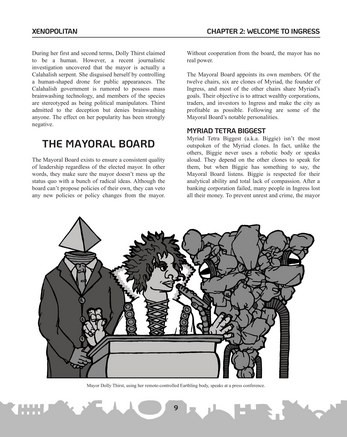 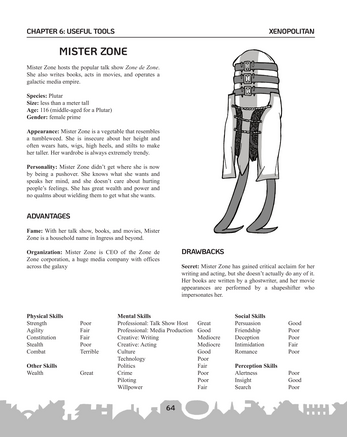 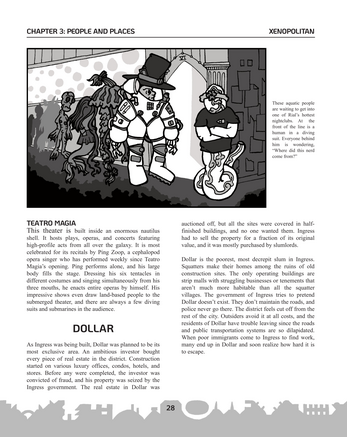 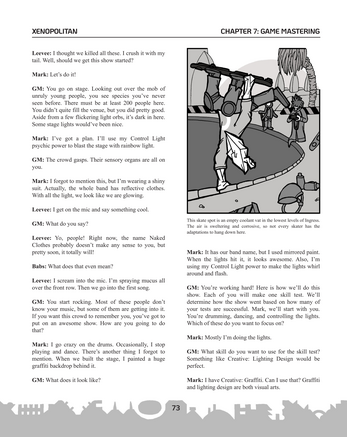